What Jesus said about terrorism and tragedy might shock you! 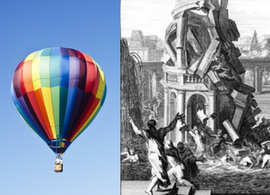 You may have heard about the recent hot air balloon crash in Texas that killed all 16 aboard.   Their lives were tragically ended when tragedy struck and the unexpected happened. One couple on the early morning balloon ride were newlyweds and another person was a preschool teacher. All of the victims had relationships, friends, coworkers and family members who will miss them greatly.

Others have perished in the last few years due to the rise of ISIS. This movement driven by radical and fanatical Islam has butchered, beheaded, killed and murdered thousands in the Middle East and their violent cancer is spreading. In 2016 alone, over 1,100 have died from ISIS attacks.

But what do you do when tragedy strikes and terrorism shocks?

In the beginning verses of Luke Jesus is told about an event that sounds much like modern day terrorism. Pilate, who was the Roman governor of Judea at that time, had murdered a number of Galileans because of their religion. Not only did these Jews perish, but their blood was mingled with the sacrifices they were offering to God in worship. This was terrible.

Jesus then brings up another well-known situation where the Tower of Siloam fell and killed 18 people in Jerusalem. How tragic. One group perished at the hands of men, the others in a structural disaster.

To the listeners of Jesus, as it is in our day, it was easy to think that good things happen to good people and that bad things happen to bad people. Jesus corrects this line of thinking in telling them that those who perished were no worse sinners than those alive. What He says next is quite intriguing:

“Unless you repent, you will all likewise perish.”

Jesus takes the focus off of the event and those who died, and on to those living. He wanted the listeners to ask themselves the question, “What does this mean to me?”

We are not guaranteed tomorrow. Those who died in the two instances mentioned above, did not think “I am going to die today.” We do not know when that time will come, but sometimes it comes when we are not expecting it. Therefore, Jesus is exhorting us all to repent, be right with God, and be ready.

God desires that once we are convicted by the Holy Spirit, we would turn from our sin (repentance) and turn to God. Repentance is essential! The Apostle Paul says in 2 Cor. 7:10 that godly sorrow, or conviction, produces repentance leading to salvation. Jesus even said this was His mission in Luke 5:32, that He came to “call sinners to repentance.”

When a person repents from sin and turns to Jesus, believing on Him, they are saved…they are forgiven…and they will conquer death because of the finished work of Jesus on the Cross. At that point you could say they were:

“Ready to live because they had dealt with the issue of death.”

The message of Jesus in times of tragedy and terror, is to be right with God. It is difficult to discern WHY things happen, so we need to be asking the question, “WHAT must I do?”

We live in a dynamic and changing world that is getting more and more dangerous. When tragedy strikes and terrorism shocks, our response should be to turn from sin and turn to God.