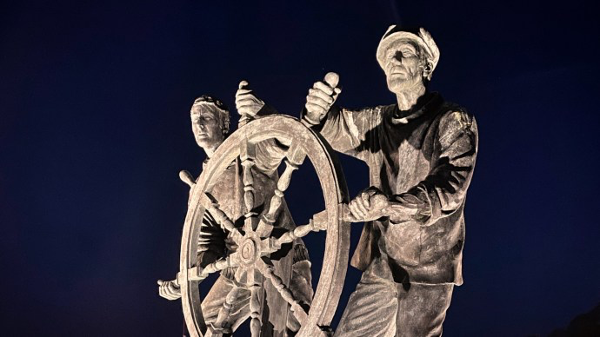 Paul writes to the Thessalonians that they were to evaluate all things especially in the area of prophecy which is the forthtelling or declaring of God’s truth.  There is to be an evaluation or even a sifting of that which is communicated to us.  We are to judge all things by the scriptures, whether it be the news or someone claiming to speak on God’s behalf,

In Acts 17:11, Paul noted that the Bereans were more noble or fair-minded than the Thessalonians because they not only received the apostle’s doctrine and preaching with eagerness, but they search the scriptures daily to judge what was being shared.  in other words, they used the OT scriptures to judge NT gospel truth.

After there is a testing, we are to “hold fast” to what is good.  The Greek word for “hold fast” is katechó and means to take possession of, lay ahold of or to hold a ship on its heading.

I really like this concept of holding a ship on its heading.  This use of the word speaks to the hands being firmly on the tiller or wheel in counteracting various pressures against the boat.  The ship’s captain must keep the vessel on course regardless of the wind, waves or tide.  We must do the same with Biblical truth.  We must “hold fast” to what is good.

What is good?  Good doctrines of salvation by grace, redemption by the finished work of Jesus, and His glorious return for His bride the church.  We are to “hold fast” to these good and blessed truths.

Consider this real-life event which was printed in the Leadership Journey in 1993:

On a commuter flight from Portland, Maine to Boston, Captain Henry Dempsey heard an unusual noise near the rear of the small aircraft.  He turned the controls over to his co-pilot and went back to check it out.

As he reached the tail section, the plane hit an air pocket, and Dempsy was tossed against the rear door.  He quickly discovered the source of the mysterious noise.  The rear door had not been properly latched prior to takeoff, and it flew open.  He was instantly sucked out of the jet.

The co-pilot, seeing the red light that indicated an open door, radioed the nearest airport, requesting permission to make an emergency landing.  He reported that the pilot had fallen out of the plane, and he requested a helicopter to search that area of the ocean.

After the plane landed, they found Henry Dempsey – holding onto the outdoor ladder of the aircraft.  Somehow, he had caught the ladder, held on for ten minutes as the plane flew 200 mph at an altitude of 4000 feet.  When they landed, he was able to keep his head from hitting the runway, which was a mere 12 inches away.  It took airport personnel several minutes to pry Dempsey’s fingers from the ladder!

Events in life might be turbulent, and you will not feel like hanging on.  But have you considered the alternative?

[Heb 10:23 NKJV] “Let us hold fast the confession of [our] hope without wavering, for He who promised [is] faithful.”  The King James Version says, “Let us hold fast the confession of our faith…”  That is a very clear exhortation!  If there was ONE THING we should be clinging to and holding on to, it is our faith in Jesus Christ!  Jesus promised that if we believe in Him, we would have everlasting life.  This is what we are to “hold fast” to.  Can you imagine the alternative?

Above all, “hold fast” to Jesus and the hope you have in Him in the midst of life’s turbulence and the strong current of the world, .  Stay the course. You can trust Him because He is faithful.  Because He has promised, He will come through.  Cling to Him and consider loosening your grip on the things of this world.